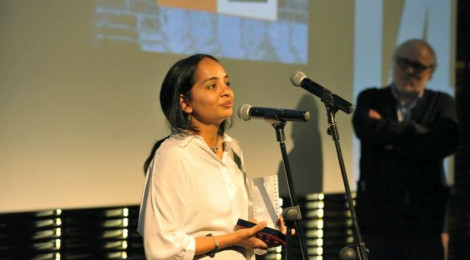 The competitive section picked the best productions of the year, which have not been released in Spain, prioritize the quality of the selected films, regardless of their original country. Documentaries that run for more than 60 minutes in length, the nature of which gives priority to the narrative point of view, the information and/or social interest about the current conditions in our world.

13 feature-length films from every corner in the world aimed for the following awards:

The decision of the Palmarés was in charge of an International Jury consisting on three professionals of relevant career:

Andrea Stavenhagen (Mexico) She has been a member of selection committees and jury in many film exhibitions and festivals. She’s currently Latin America Delegate for the San Sebastián International Film Festival and a contributor a the Morelia and Sarajevo festivals.

Denis Poncet (France) Journalist and film producer, co-founder of MAHA productions with Jean-Xavier de Lestrade, with whom he produces many feature-length documentaries awarded all over the world, including the Oscar to the Best Documentary in 2002 for Un coupable idéal.

José Luis López Linares (Spain). Awarded with a Goya as a director of photography, he develops an important career as a documentary filmmaker from his production company Cero en Conducta, which wins numerous awards, as the Ondas or the Forqué and the Goya for UN INSTANTE EN LA VIDA AJENA (2003).

1st prize of the jury for MY NAME IS SALT by Farida Pacha (Switzerland, 2013)

Year after year, over eight endless months, thousands of families, travel to the desert in India to pull out SALT from the burning sand. Each time the monsoon, the desert is transformed into an ocean and the salt fields disappear. But they come back, striving to obtain the whitest salt on Earth.