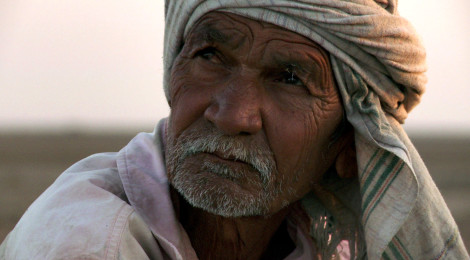 This is not a social issue film, even though the story of the salt people and their exploitation is a shocking one. What attracts me is the more fundamentally tragic question at the heart of their existence: what compels them to return to the desert to labor tediously year after year, generation after generation? What meaning do they find in this existence?

Following the tradition of films like Into Great Silence and Quince Tree of the Sun, this is an observational documentary about people striving for perfection and their devotion towards work. The canvas of the film is very small; its universe limited to the minor pleasures, travails and tribulations of this family. There are no large dramatic events. Rather, it is the simplest possible story spread out over an endless eight months. The simplest possible actions set in an unchanging landscape. And yet everything hinges on these actions, on this landscape. At every stage of the salt making process, the family must work with precision and a close attention to details – a salt bed not trampled well will turn soft in no time, a rake with even one spike not aligned right can ruin their labour of months. Through the eight months, Sanabhai’s family will have to deal with many small crises: the pump stops working, the level of the ground water decreases, there are unseasonal rains or sandstorms. If the family has not made enough salt at the end of the cycle, they will be in debt to the salt trader the following year. The rewards are few, but still they take pride in making the best and whitest salt in the world. The film ends with the monsoon: the desert is inundated with rain water and all their salt fields have been washed away. The next year the family must return to start the process all over again.

This is a purely observational film – there are no interviews or voice-over. The style of the documentary is lyrical and poetic but very austere. The camera work is slow, takes are long, images are carefully juxtaposed. The camera, though distant from the subject, is still able to establish a delicate intimacy. Repetitiveness is a strong motif in the film. We see it in the unchanging landscape of the desert, in the patterns of the day, in the monotony of their work. The film creates a world of endless toil which is nonetheless fascinating, hypnotic in its slow rhythms. 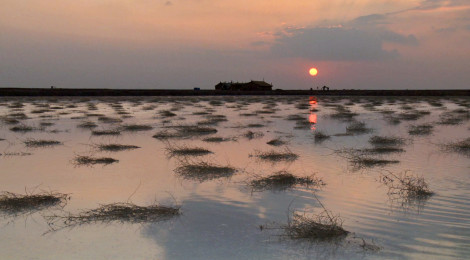 The film does not leave the space of the desert for its entire duration. The outside world is featured only as it makes its presence felt in the desert: the salt supervisor’s visits, the water tanker’s weekly call, an occasional fish seller, trucks that come to collect the salt at the end of the season. The desert is the core of the film – this stunning, unusual setting is exploited fully so that the desert becomes a character: strange, illusory, mesmerising, hard.

In the film, time is slow, just as it is in the desert. As viewers we are given the space to meditate on a different experience of time; to sense things, to perceive a whole visual and acoustic universe, to be able to make the leap from the natural world to a more poetic, abstract level.

As a filmmaker, I am attracted to stories that lend themselves to a philosophical exploration on the human condition. In Sanabhai’s story, there appears a mirage-like reflection of the ancient tale of Sisyphus, who so loved life and so struggled to prolong it, that the gods punished him by condemning him to work without reward. By reducing life to its most basic equation: that work is our condition, and not to work is to be outside life itself. The film, then, is a philosophical meditation on deeper questions: What is the meaning of work? Why do we do the work we do? What is the relationship of work to life? In the end, Sanabhai’s story is meaningful not just because it tells us something about the world we live in, but because it tells us something about our own selves.